The pristine beaches and the wildlife of Australia hides a lot more than eyes can meet. The national parks and the beaches house some of the world’s most stunning waterfalls and rock formation, and yes, these are natural.So, if you are planning your next trip to Australia, these picturesque waterfalls can be easily among your travel itinerary.

From swimming or bushwalking to flying or cruising, the Australian waterfalls are sure to offer that unforgettable experience to you this trip.

However, before you head over to the scenic country, you must have the ETA Visa Australia in place without which you would not be authorized to enter the country as a foreign national. All you need to do is to apply for it online and it gets linked to your passport automatically.

Now, that you have your visa in place, let’s see which waterfalls in Australia are worth the visit.

Situated in the Kakadu National Park in the Northern Territory, it’s one of the leading attractions of the Australia. It’s also accompanied with its sister waterfalls, the Twin Falls in the proximity. Jim Jim falls originates from the rains during the monsoon and is at its best during the tropical summers that is, from November to March. 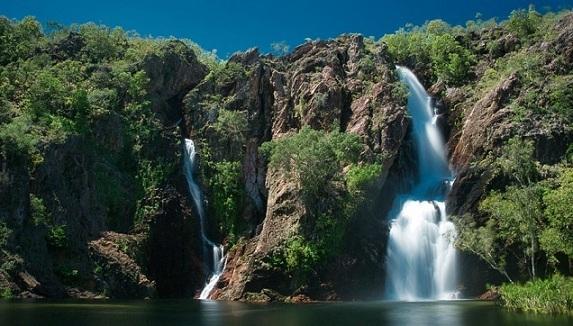 If you are travelling to the Northern Territory, Wangi Falls is a must visit. Located in the Litchfield National Park, it is open all through the year however, swimming may not be possible always due to the water levels. This nearly circular pool features a half concave rock face, below which the water flows on one side. One the other side there is peach-coloured sand which is a fantastic outcome of the water erosion for years on the neighbouring rocks.

This picturesque fall has its own reasons to be popular among the instagrammers. This fall is a result of the granite boulder deposits close to Cairns situated within the Far North Queensland that’s home to waters with a unique turquoise hue. The waterfall cascades in layers allowing the simmers to swiftly slip into water over the sooth rock faces. It’s a quick one-hour drive from the Cairns which is a part of the Wooroonooran national Park. The falls are kept alive by the rains on the highest peak of Queensland.

It’s a fascinating sight in the Kimberly Region of Western Australia that features some of the most rugged peaks, exotic canyons, and the most confined wilderness of the world. Among this wilderness is located, possibly the most magnificent sights that is, the 80 meters tall rock faces of the King George Falls. The cliff seems to be chiselled by rushing water since, billion years and creates a magical view in a remote region.

Among the several beautiful waterfalls in the Gold Coast region is the is this spectacular Natural Bridge that’s hidden in the Springbrook National Park. The rock formation that’s transformed into a curve by the waterfall pressure is a complete visual bliss over a basalt cave. You must not miss the colony of the microbats and the glow-worms in the proximity which is a sight to behold. Whether you visit on your own or take a guided tour, you can also take a quick tour of the Moran Falls among the wilderness of the O’Reilly rainforest within Lamington National Park.

There would be not many countries that’s home to a sizable number of picturesque waterfalls and Australia is definitely one of them. So, now that you know how long does Australian visa take and how to acquire one, taking a tour to these Australian waterfalls is just a flight away.

Other articles that may interest you

Visit Kangaroo Island Australia-ETA.com Travel on the beautiful Kangaroo Island is truly spectacular. Here you can find the cliffs overhanging the sea stormy, quiet beaches, an ocean...
Top of Page