Travel on the beautiful Kangaroo Island is truly spectacular. Here you can find the cliffs overhanging the sea stormy, quiet beaches, an ocean blue color, vast Boschive Formations of eucalyptus, sheltered bays and coves hidden. But do not be fooled by the dimensions, in fact though seemingly an islet near the great Australia in fact Kangaroo Island is as big as the Val d' Aosta and therefore the tourist need time to visit it well.

Not only the Echidna, kangaroos, koalas, wallabies and penguins live on the whole island, but these creatures are also easily arranged at the approach so completely one with this memorable experience of close contact with nature. A visit to South Australia may not be complete if you do not pass a few days on the island. If you are staying at Kingskote at the Ozone Seafront remember that evening just opposite the hotel part of the guided walking tour to observe the Penguin colony and, behind the hotel there is a restaurant that is called local Beautiful , well worth visiting but remember that you must go up to 8 pm.

The most famous attraction of Kangaroo Island is the Natural Park of Seal Bay on the south coast of the island. It is a place of permanent stability for a colony of around 500 rare Australian sea lions. Particular important, this Cologne represents approximately 10 % of the entire world population of this species. Sea lions Seal Bay accept without problems the presence of people in their beach and tour guided by the Park Ranger assure an encounter as far as possible aligned with these large creatures. At the top of the walk on wooden platforms is an excellent information center that provides everything needed for the knowledge about the life of sea lions.

Kangaroo Island has 18 National Parks Natural and dedicated to the protection of its rare flora and fauna. The greater extension of these is the Flinders Chase National Park, that west covers most of the island with its pristine forests and grasslands.The area is a true paradise for many seals, sea lions, eagles marine birds with plume and many other varieties of flora and fauna. The inner part of the park sees the predominance of eucalyptus forests, place of refuge a series of animals such as kangaroos and wallabies, possum, Echidna and Platypus. Koalas are also numerous on the island, which is one of the few places in Australia where visitors can admire them in their natural habitat.

The Remarkable Rocks and the Admiral's Arch

maritime environment of Kangaroo Island was the main architect of his terrestrial forms. In no other place you are such demonstrations of this, since the bizarre natural sculptures of Remarkable Rocks. These massive formations of granite stand out high on a promontory with their contorted, curious excavations created in  thousands of years of wind, rain and splashes coming from the waves. The Remarkable Rocks are one of the representations most photographed on the island, and are a true wonder for students of geology. Another natural icon of Kangaroo Island is the Admiral's Arch at Cape du Couedic. This rocky arch, chiselled by the elements, rises above a species of auditorio natural coastal that constitutes an area of refuge for sea lions New Zealanders who fish in the waters of the district and then rest on the surrounding rocks. 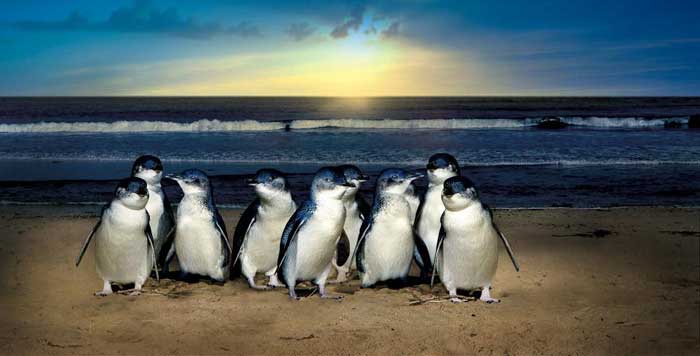 A visit to Kangaroo Island cannot be complete without having admired the little penguins, and build their nests on sandy hills and on the rocky headlands from parts of Penneshaw and Kingscote. Unique among the species which reproduces in Australian waters, these cute penguins are waiting until sunset before returning to the shore. Every night, are performed guided tours at Kingscote and Penneshaw. They are held after the sunset, when the Penguins return to their settlements after having caught in the sea.

Dive in the waters of the Island

Kangaroo Island offers some of the most temperate waters in which dive throughout Australia. There are coral reefs multicolor just below the water level and rocky barriers where it can be observed a marine ecosystem undisturbed. The submerged life is lively and the pristine waters are rich in fish which the devil Blue, The Harlequin, fish of corals and the elusive Leafy Sea Dragon.There are more than 80 places where there were shipwrecks, scattered all around the island, in many of which you can still see the remains off the coast of beaches.

at the Natural Park of Kelly Hill, a set of caves of the Kelly Hill reveals a underground labyrinth. The Caves and the excavations limestone contain various series of formations of stalagmites and stalactites and other concretions.

Kangaroo Island has some of the most beautiful beaches of Australia, and are ideal for swimming, surfing, observe nature or simply for rilassarvisi. The twisted coast to the south of the island offers spectacular sandy beaches pristine, as Vivonne Bay and D'Estress Bay, while the north coast has a series of beaches for swimming in complete safety, as EMU Bay, Browns Beach and the American Beach.If you are a surfer, you cannot miss the opportunity to ride the waves on these pristine beaches...get your electronic visa for asutralia and parts for an unforgettable holiday.

This is an area of spectacular white and sandy dunes, surrounded by the typical vegetation of the bush, near the coast to the south of the island. It is worth to do a climbing on the dunes to enjoy spectacular views along all the surroundings of sand and desert.

The products of the Island

The island offers magnificent food and products such as free-range poultry, honey of Ligurian bees and the 'marron', a delightful crustacean of sweet water. There are flocks of sheep that daily produce fine cheeses and yoghurt and a distillery of eucalyptus. In addition to Kangaroo Island It produces excellent wine and the two areas most renowned are Dudley Wines near Pennashaw, and Two Whheeler Creek Wines at the center of the island near to AndermelMarron.

How to reach Kangaroo Island

This island can be reached in various ways. In fact, from the coast, you can take a ferry, and from there you can reach the island in about forty-five minutes. Those who want to take a ferry must necessarily arrive in the city of Adelaide, and it is from there that you can also take a plane.

5 Best Outdoor Markets in Sydney for That Ultimate Shopping Pleasure Australia-ETA.com Sydney’s outdoor markets are one of the best destinations you can explore as an avid shopper. T...

Cairns and the Great Barrier Reef

Cairns and the Great Barrier Reef: Experiencing the Breath-taking Beauty of Australia Australia-ETA.com Deep down the beautiful island country, Australia, there’s the mesmerizing the...

The Ultimate Australian Cuisine Experience You Cannot Afford to Miss Australia-ETA.com If you are planning your next trip to Australia for business or tourism, and if this is your fi...
Top of Page